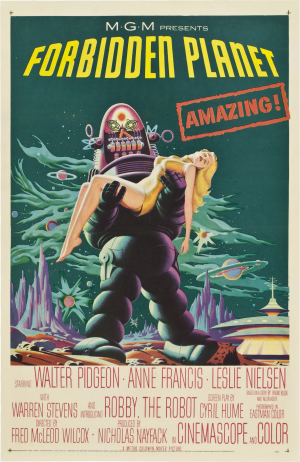 Furthermore Forbidden Planet was the first film to use an entirely electronical musical score – termed “electronic tonalities” – composed by Bebe and Louis Barron. The “bleats, burps, whirs, whines, throbs, hums and screeches” that make up the sound track contained carefully developed themes and motifs, as well as providing general atmosphere. The Barrons finally released their soundtrack in 1976 as an LP album for the film’s 20th anniversary; it was on their very own Planet Records label (later changed to Small Planet Records and distributed by GNP Crescendo Records). 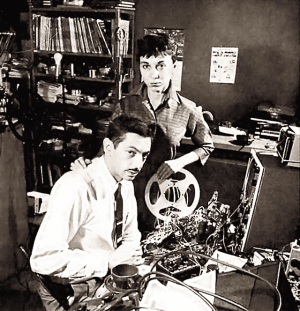 On the album sleeve notes of the Forbidden Planet soundtrack, Louis and Bebe explain:

“We design and construct electronic circuits which function electronically in a manner remarkably similar to the way that lower life-forms function psychologically. […]. In scoring FORBIDDEN PLANET – as in all of our work – we created individual cybernetics circuits for particular themes and leit motifs, rather than using standard sound generators. Actually, each circuit has a characteristic activity pattern as well as a “voice”. Most remarkable is that the sounds which emanate from these electronic nervous systems seem to convey strong emotional meaning to listeners. […]. We were delighted to hear people tell us that the tonalities in FORBIDDEN PLANET remind them of what their dreams sound like. […].”

Recently I started to get interested in modular synthesis; for now I use the excellent virtual modular synthesizer VCV Rack (open-source and freely downloadable), I am learning the basics and gaining experience with the various types of modules and their functions. Later when I have clear ideas I will start buying the first eurorack hardware modules. I also started writing some custom modules aimed at creating generative music (programmed in C ++) and published them in the VCV library in the AlgoritmArte brand . In particular, doing some tests with the  Planetz module I managed to obtain a purely generative sequence (no notes “played” or human intervention) of sounds that recall the atmosphere and the soundtrack of Forbidden Planets. 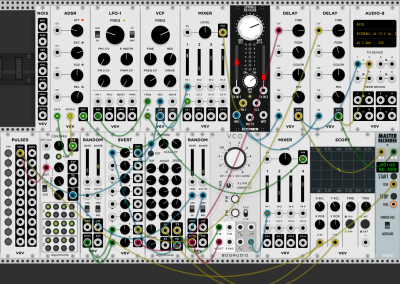 You can download and play the VCV patch here (.vcv format). Thanks to VCV, Bogaudio (VCO), Befaco (Spring Reverb) and Nysthi (wav recorder) for their great modules that I used in the patch.

I therefore decided to record a part of it and put it as the background of a short sequence of frames taken from a scene not inserted in the film and put in loop. Here it is the final video …

1 thought on “Return to the Forbidden Planet”