The word algorithm is derived from the appellative “al-Khuwārizmī («native of Khwarazm») of the 9th-century mathematician Muḥammad ibn Mūsa. It designates a sequence of well-defined mathematical operations and rules that can be used to solve a problem.

In computer science, an algorithm is usually a sequence of computer instructions (written in a programming language) that executed by a computer starting from an initial set of data (the input) produce an answer (the output). The answer can be a simple Yes/No or another set of data (e.g a numeric value).

There are three important aspects of an algorithm:

Though the operations are unambiguous, sometimes it can be useful to use random values given as input or generated by some specific instructions.

A simple example of algorithm that can be used to escape from a maze: 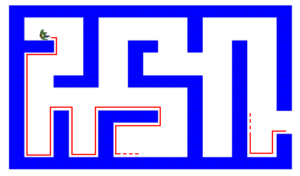 … soon or later your right hand will “touch” the exit. This simple “algorithm” works well for mazes that don’t contain isolated parts or sections.